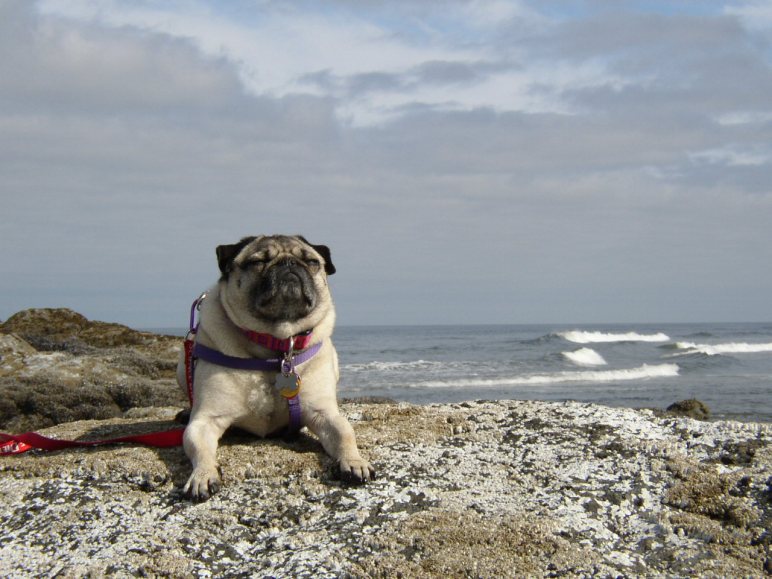 Years ago, when blogging first came into vogue, I remember thinking, “Oh my god–why would anyone want to expose their private lives to the world like that?  It’s like letting anyone and everyone read your diary!”  And, well, yeah.  It is. The differences are 1) I’ve given everyone permission to do it, and 2) I can massage my words for five hours or five days until I’m ready to send them out into the Universe via the Internet.

I had no idea, though, how cathartic it can be.  I mean, different people blog for different reasons.  I’ve read a blog about Pacific Northwest native flora, a blog in which the author wrote of being date-raped, blogs about wine, blogs about beer, blogs about dogs.  My favorite blogger–who recently published her first book, by the way–is a brilliant artist named Allie Brosh, who writes Hyperbole and a Half.  She’s one of two authors whose writing consistently makes me laugh till I cry–or moby wine out my nose.  (Bill Bryson is the other.)  Another favorite blog is Danger Garden.  Really, what’s not to love?

There are blogs for literally every topic under the sun.  I call this “my online mat space” for a reason.  It’s Bloga.©   OMG, I totally just coined a new word.  (And yes, I totally inserted that copyright mark for a reason.)

Since I posted last night about Dude, I’ve been feeling lighter.  Clearer.  More creative.  Better, certainly, than I have the past few months.  What could cause this?

Merriam-Wesbter defines catharsis as “the act or process of releasing a strong emotion (such as pity or fear) especially by expressing it in an art form.”  Ooooh.  Oh, quite.  Please and thank you.  Could I possibly be nudging myself into my Vortex of Attraction by sharing my personal life with anyone and everyone?  Is that wrong?  It sounds wrong to me.  But how can it be wrong when it feels so good?

Sometimes I so desperately need to express myself, but I just don’t feel like talking to anyone–not Loving Husband, not parents, not Dude, not sister-in-law, not best friends.  Bloga provides me that outlet.  Expressing myself through this blog feels like talking to Happy Dog:  I don’t necessarily need Bloga to say anything, only to listen.

But Bloga just is.  And sometimes that’s all I need.

I was taking my favorite back road home from Corvallis one day last week and thinking about lots of stuff–like what a gorgeous day it was, and how long it had been since I’d blogged, and how much I missed my brother in South Dakota (I was listening to the Foo Fighters–which always reminds me of him–at top volume), and, as usual, on top of it all, feeling supremely sorry for myself.  Pathetic, right?

So, with darling husband off on a business trip in San Diego this week,  I finally decided to open a bottle of wine, tackle all those things at once and write a post about my little brother, whom I adore and miss like crazy.  He just celebrated his 45th birthday, and it hurt that I wasn’t able to be with him to toss back probably more than a few whatevers, celebrating with him, my sister-in-law and our parents.  I’ve gotta tell you:  even with all the modern technology available that supposedly enables us to keep in touch with each other better than ever before–even Skype, which allows us to see each other while we’re talking–none of it is a remotely good substitute for actually being there.  My brother has this . . . presence.  And I just love being with him.

Though we have a lot in common, my brother and I are very different people.  I don’t think we look at all alike, but others tell us we do. 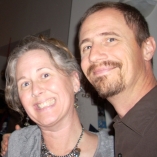 We had a similar upbringing–obviously–but had very different experiences as young adults.  My brother attended one university, had one major, joined a fraternity, partied like it was 1999, got engaged to a hippie chick but broke up before they graduated, married a different woman shortly after graduating, and then got divorced.

I attended four schools, declared two different majors, mocked frats and sororities, partied far less than my brother, graduated in . . . um . . . eight years, also got engaged and broke it off, then married someone else more than twenty years later.  Oh yeah, and I started two graduate programs at two different schools, neither of which I finished.  I could be a fucking doctor by now, but I only have a bachelor’s degree in geography to show for all those years of school.  My brother has the same degree from the same school, and he got his in five.

Like most big sisters, when we were kids, much of the time I hated my brother like poison.  He was a typical little brother:  following me everywhere, touching my things (imagine!) and being a general pain in the ass. 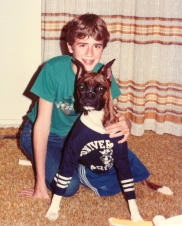 You know how it is.  I wrote hateful things about him in my diary (what big sister didn’t?),  and once my dad read it and reprimanded me, seriously worried about what I’d written.  (I was maybe 10 or 11 at the time, by the way.  An ex-fiancé violated that privacy as well, years later, which literally caused me to throw out all the diaries and journals I’d kept up until about the age of 23.  God, how I wish I hadn’t done that.)

By the time I was in high school, we had become pretty good friends.  And when I went away to college, we both realized we missed each other a lot.

[Sigh.  I was so skinny back in the day.]  We worked a summer job together at Silver Lake Family Campground outside Haymarket, Virginia, cleaning up “goose poopies” and renting pedal-boats as part of our daily tasks, and listening to Purple Rain and When Doves Cry on the jukebox.   I withdrew from college at the beginning of my second year, worked full-time, then went on an extended trip to London with a friend and talked about how I might not come home.  More long-distance bonding with brother.

Then, in 1985, came the event that, I believe, guaranteed our permanent bond from that point forward:  my parents moved our family from northern Virginia to Rapid City, South Dakota.  (They bribed us with waterbeds.)  We moved within a few weeks of my return from London, offering me an opportunity to experience the culture shock of a lifetime.  Mom and dad drove in one car, and my brother and I drove in mine.  I was 19 at the time; he was 15.  I have a very clear memory of us driving across South Dakota on I-90, looking at each other, horrified, and asking, “What IS this place?  Where the HELL are mom and dad taking us?”

Amazingly, we both survived–although my brother, at his impressionable age, sometimes allowed himself to be swayed by the local trends

while I strictly adhered to a more cosmopolitan 80s fashion and hairstyle.

I commuted to a local college, and my brother finished high school.  After graduation, he left to attend the University of Wyoming.  Meanwhile, I transferred to my third school as an undergraduate, this time back in my home state of Pennsylvania.  He and I wrote to each other and talked on the phone a lot.  Somehow he convinced me not only to transfer–one last time–to UW, but to share an apartment as well.  It was during this time we started calling each other Dude.  To this day, I call him Dude.  And so I will refer to him as Dude from here on out.

For the longest time, I seemed to be the mature one.  Being the firstborn sibling, I was supposed to be the responsible one.  And for a while, I kinda was–in my mind, at least.  Dude was the frat boy, the partier, the rock climber, the shooter of paintballs–the one who got in trouble with mom and dad.  Though I was clearly incapable of committing to one school, I had always received high grades and rarely got in trouble.  That is, until I got engaged to George.  No one liked George:  neither my parents nor any of my friends thought him worthy.  But my brother stuck up for him–and for me.  And when I broke up with George–for a variety of reasons, not the least of which was him reading my journal without permission–Dude didn’t say “I told you so.”

A lot more long-distance bonding occurred when I supported him through the breakup of his first marriage.  As divorces go–especially since there were no children involved–it maybe wasn’t the most traumatizing one on the books.  But at the time, it was the end of the world as he knew it.  And he did NOT feel fine.  It was worse than awful for him, and I performed my role as Big Sister to the best of my ability from 1300 miles away.  But I regret not being able to actually Be. There. for him.  It’s really hard to only be able to offer a shoulder to cry on over the phone.

Since then, however, my brother and I seem to have switched roles.  He’s become the stable career professional, working his way up through the ranks of the U.S. Forest Service with co-workers who love and respect him.  He remarried and has lived in the same town for the past twenty years.

He bought his first house on his own after his divorce, and has almost completely remodeled the one he bought with my sister-in-law more than ten years ago.  He has never lost his job, experienced the humiliation of calls from a collection agency, or been on unemployment like yours truly.  He’s learned to hunt with a rifle and crossbow, successfully parents two dogs, 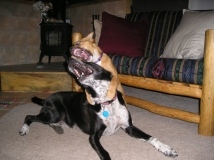 has owned a business and climbed Devil’s Tower, builds his own furniture and makes his own German sausage, and is a fabulous cook.  He doesn’t gain weight or need glasses, over-analyze, obsess over every little thing or live in the past.  He’s brilliant, irreverent, afraid of nothing, and he can make me laugh till I cry. 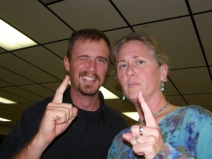 On the other hand, it took me eight years and four schools to finish a bachelor’s degree.  I’ve put myself in debt to attend graduate school and never finished, have owned four homes in three states, haven’t held a job for more than two years since 2007, been on unemployment twice in the past four years, work 19 hours a week for $12.56 an hour and haven’t had medical insurance since last summer.  I’ve struggled with my weight for the past twenty years and am more nearsighted than anyone I’ve ever met.  I question everything, beat myself up continually, feel like I can’t do anything right and usually wish I were anywhere but where I am.  And recently I yelled at my husband about how angry and resentful I am that he has a better job than me.  I’m a real prize, aren’t I?

I’ve posted this photo before:  as long as the shoe fits, I’ll continue to wear it.

The bottle’s almost empty, so before I start bawling all over myself, I need to let the Universe know how grateful I am for my family, Dude in particular.  I love him more than I can say, and I am unspeakably proud of the man he’s become and the life he’s built for himself.  There are days I miss him so much it makes me cry.

My brother has made an ordinary life extraordinary simply by living it and being who he is.