Squishie. Hoochie. Big Gray Girl. She had many nicknames. Our 18-year old matriarch, Sidra, crossed the Rainbow Bridge a week ago today, leaving a gaping hole in our little family.

We adopted Sidra in May 2002 from the Humane Society of the Black Hills in Rapid City, SD. She was supposedly about a year old at the time, and had recently given birth, making her teats a little prominent. Because of this, we named her Sidra, for one of Jerry Seinfeld’s girlfriends on the show, whose breasts were both “real and spectacular.” 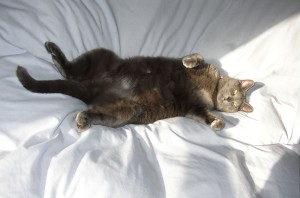 We didn’t realize when we brought her home that she had a highly contagious upper respiratory infection, and our resident cats, Sputnik and Biscuit, were behind on their shots. We were rewarded with three sneezing, snotty cats for almost a month.

In her younger days, she was a gorgeous, plush, gray shorthair who appeared to have some Russian blue in her genetic makeup.

She almost always looked grumpy, even when she was purring happily, being cuddled in our arms or on a lap.

Regardless of that, she was a very good-natured, tolerant cat, toward Loving Husband and I, anyway. 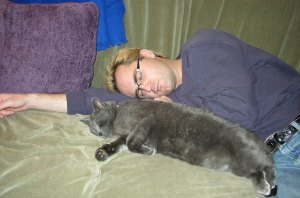 (You wouldn’t believe how many photos I have of Loving Husband asleep with one or more of our pets.)

Sidra never once clawed or bit me, like all our other cats have at one time or another. She was very, very tolerant. 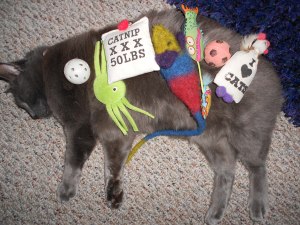 Most of the time, she was a terrible bully to her sister, Nemo–but she was capable of sharing at times.

She was such a bully, in fact, that we came very close to rehoming her a couple times. It’s very painful to remember that in the context of losing her last week. Words cannot express how thankful I am that it never came to pass.

To a lesser extent, she also bullied our former boys, Sputnik and Biscuit. But they weren’t as easily intimidated as Nemo. 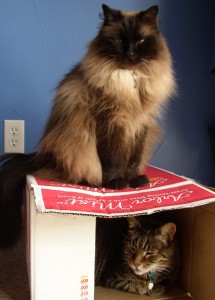 Even though she didn’t actively bully Chai, 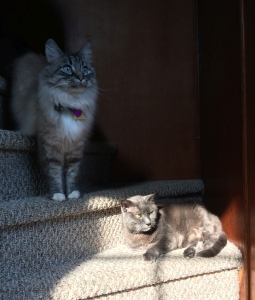 he was, nonetheless, well aware of his place in the pecking order.

The dogs she simply ignored. 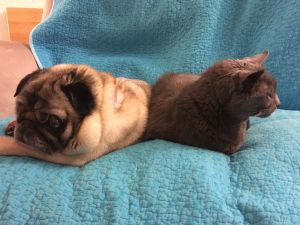 She was the only one of our four-legged crew who lived in all five houses we owned from 2001 till now.  In February 2007, she moved to Harrisburg, PA, with Loving Husband, who moved there four months ahead of the rest of us to start his new job, while I stayed behind in Rapid City to sell our house. 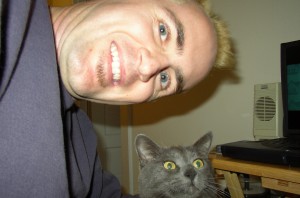 Sidra loved being carried around in a laundry basket, with or without laundry in it:

She was about 14 lbs. at her heaviest, so laundry could be a serious workout at times–especially since our washer and dryer were never on the main level.

She really, really loved being in the laundry basket.

Lounging in the sunshine was also a favorite activity. 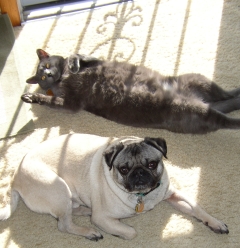 Like every one of our pets, Sidra brought us more laughter, love and joy than we could ever have imagined when we first brought her home. She was a gift to us from a loving Universe, and I will miss her every single day, like I do Sputnik, Biscuit and Kyllo. I feel confident in my belief of what happens to humans when they transition back into Nonphysical–as explained by Abraham-Hicks–but I don’t understand as well what happens to our pet-children. I don’t see any reason, though, why they can’t also be part of my Posse.

I do know this: the Universe is telling me that she’s okay, and her energy is still very much present, as evidenced by this link a friend sent two days after she died:

According to my friend, this cat has already been adopted.  Sidra is working her magic from behind the scenes.

I like to think she’s found another laundry basket in a patch of sunshine.